Some 450 million people worldwide currently suffer from some form of mental disease or brain condition, but almost half the countries in the world have no explicit mental health policy and nearly a third have no programme for coping with the rising tide of brain-related disabilities. These findings were included in a major report by the World Health Organisation (WHO) released in October 2001.The report titled Mental Health : New Understanding, New Hope, was the culmination of a year-long effort that included devoting World Health Day to the subject of mental illness last April and the publication of a detailed survey of the status of treatment of mental conditions in developing countries.

The WHO also believes it is times for governments to make mental health a priority and to allocate the resources, develop the policies and implement the reforms needed to address this urgent problems." 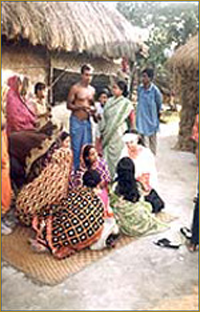 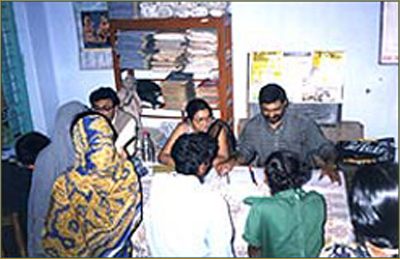 In the light of such reports and findings the National Institute Of Behavioural Sciences (NIBS) of Kolkata undertook an extensive survey of an area in the Sundarbans covering 10,000 Square Km of the Southern Ganges River Delta, and, this marshy region stretches across both India and Bangladesh down to the Bay of Bengal. Its small indigenous populations regularly utilise such resources as fish, honey and firewood, and has worked hard to transform the forests into paddy land that seem to have made the greatest impact upon this rare urosystem. It is now a World Heritage Site and a Biosphere Reserve.

The women of the Sunderbans play a very important role in their overall lifestyle but despite this fact the women seem to be shrouded in mystery. The story of the Sunderbans is older than that of Bonobibi, the forest goddess who rules this land of mud and water. Yet, with this powerful goddess at the heart of the jungle, stories of human women are nearly non-existent. The people of the Sunderbans also worship a four-armed goddess of snakes named Manasa. Hence, though the people worship women chronically they go nearly unperceived in both historical and present day accounts.
Demographic accounts of women in the Sunderbans have them numbering about 932 for every 1000 men. Although, they are central to their communities and families they are never given much prominence.

Living in the Sunderbans is dangerous  it requires prayers to Bonobibi, humility and gratitude, ingenuity and tolerance. Though the mens lives have been documented by anthropologists. The story of the Sunderbans women remains nearly untold. In remaining past and current accounts, the male woodcutters, fishermen and honey collectors are those that are discussed, regardless of the fact that the women contribute not only to domestic chores but their families incomes. They work not only taking care of household duties but often help the family survive financially. The widows become the sole providers for their families and take on the roles traditionally taken by the men  wood cutting, honey collecting and fishing.In spite of all this the women do not have the power of the goddess  however possession by spirits may be one way to exercise their power. The womens stories lie dormant to those outside their own worlds.

Despite the fact that the women share almost if not more of the workload, they are never highlighted. They live a life of continuous stress and turmoil and this naturally takes its all on their physical and mental well being. Since the women have to undertake both work outside the house as well as indoors, their work output may be considered more, but health care or proper food ingestion is not directly proportionate to the labour they undergo. Even during pregnancy due to poverty and possible financial crisis developmental disabilities can arise from genetic and nutritional factors, infatuations, diseases and traumatic events which virtually go unrecognized in many third-World countries. Ironically as many as 80% of the worlds children are born in those countries, where nutritional deficiencies, environmental toxins and perinatal complications are prevalent. Poverty can also be both a cause and result of ill health and may contribute to brain disorders through poor nutrition, unhygienic living conditions and inadequate access to health care. 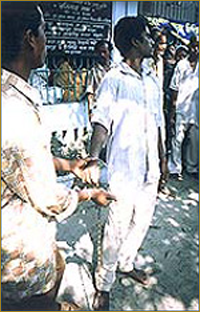 In the survey undertaken by NIBS, mental and behavioral disorders were found to be common among the patients attending the primary health care setting. This survey was done because an assessment of the extent and pattern of such disorders in these settings are useful to identify individuals with disorders and providing the needed care at that level . The most affected mentally were the women compared to the men and majority of the children were fund to be congenitally mentally retarded. Mental retardation is considered to be a common disorder which usually causes severe disability and factors abbreviated with the prevalence and course of mental and behavioral disorders which include poverty, sex, age, conflicts and disasters, major physical disorders and the family and social environment. The burden on families ranges from economic difficulties to emotional reactions to the illness, the stress of coping with disturbed behavior the disruption of household routine and the restriction of social activities. Expenses for the treatment of mental illness often are borne by the family because mental disorders are not covered by insurance.
Hence, for the holistic approach, i.e. both physical and mental well being of the women of Sunderbans the survey was undertaken. Diagnosing and hence solving their problems was one of the aims of this survey. Listening to their dilemmas and conflicts results in ventilation and their consequent alleviation, so that they live a healthy and happy satisfied life with their families.

Despite the widespread effects of the disorders, with proper treatment patients can live productive lives and be vital parts of their communicates. According to the WHO, the responsibility for action lies with governments. Statistically, at present more than 33% of countries allocate less than 1% of their health budgets to mental health. The WHO has provided recommendations that can be adopted by every country to help improve mental health. The recommendation include providing treatment in primary care; making psychotropic medicines available, educating the public, establishing national policies, programs and legislation, developing human resources to improve training of mental health professionals, and linking with other sectors such as education, labour, welfare and law.